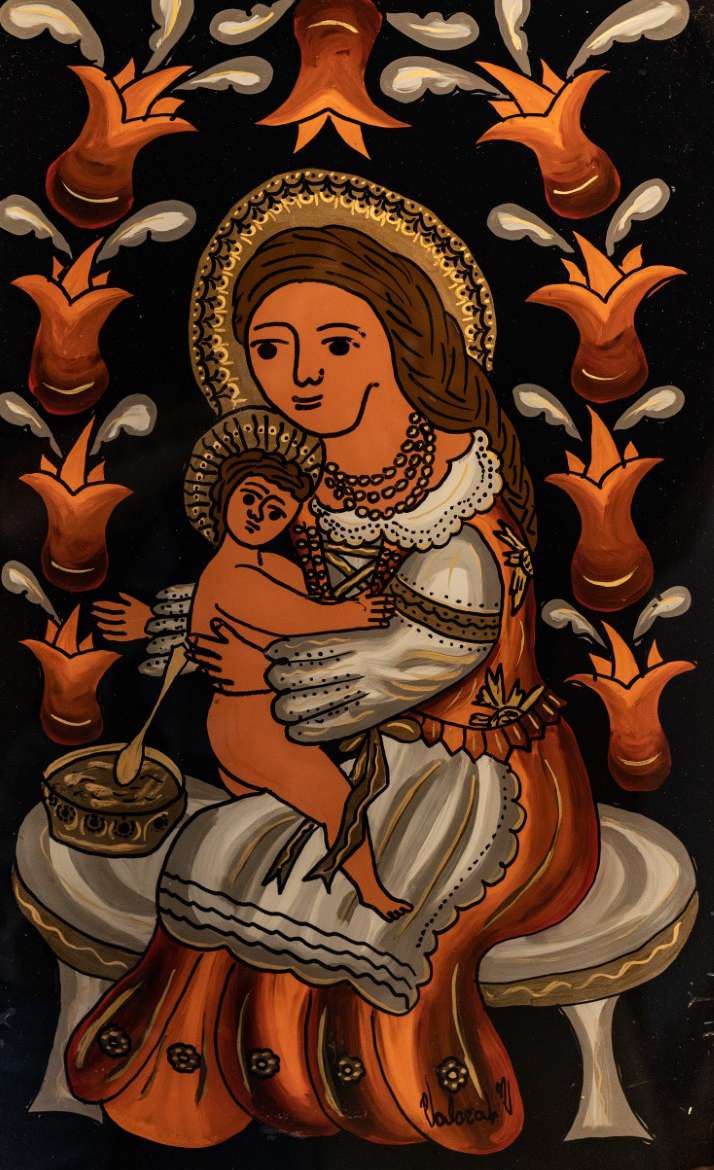 Władysław Walczak Baniecki was born in Kościelisko in 1934 and died in 2011. In 1962, encouraged by a folk artist involved with artistic smithery, Mieczysław Biernacik, he made his first attempts to paint on glass. Mr. Walczak Baniecki had no instructors and developed his own technique independently. Initially, he mainly painted genre scenes from the life of highlanders. Later, his work was dominated by religious motifs, but also by his favorite scenes with highland robbers. His painting on glass is characterized by original colors – dark backgrounds contrasted with details in fiery reds and yellows, and sometimes saturated earthy greens. In 1968, Władysław Walczak Baniecki took part in the Glass Painting Competition organized by the Tatra Museum and won first prize. It was his artistic debut and at the same time a breakthrough in his work. In the same year, the Polish arts and handicrafts trade organization, Cepelia, offered him cooperation with a branch of folk art cooperative “Millennium”. This started a period of intensive work and many trips, often abroad, during which he promoted the culture of Podhale. In the 1970s, the artist started sculpting and the colors of his sculpture works are similar to those of his paintings on glass. Władysław Walczak’s paintings have been shown at many collective exhibitions, as well as his own individual exhibitions, in Poland and abroad. The paintings are included in the collections of many Polish and foreign museums. In 1973, Władysław Walczak Baniecki became a member of the Folk Artists’ Association, and from 1976 he ran an open studio in his house, where he presented his works. He won many awards for his activity in the artistic field and his contributions to the culture of the region and the country. His most important awards include: the Award of the Minister of Culture and Art (1969), the Oskar Kolberg Prize for Merit to Folk Culture (1977), the Badge of Merit for Culture Activist awarded by the Minister of Culture and Art (1980), a Medal for the contribution to and protection of the culture of Podhale (2000), and the Award „Merit to Polish Culture”, awarded by the Minister of Culture and National Heritage (2006). In 2007 he was awarded the Silver Medal “Merit to Culture – Gloria Artis”.