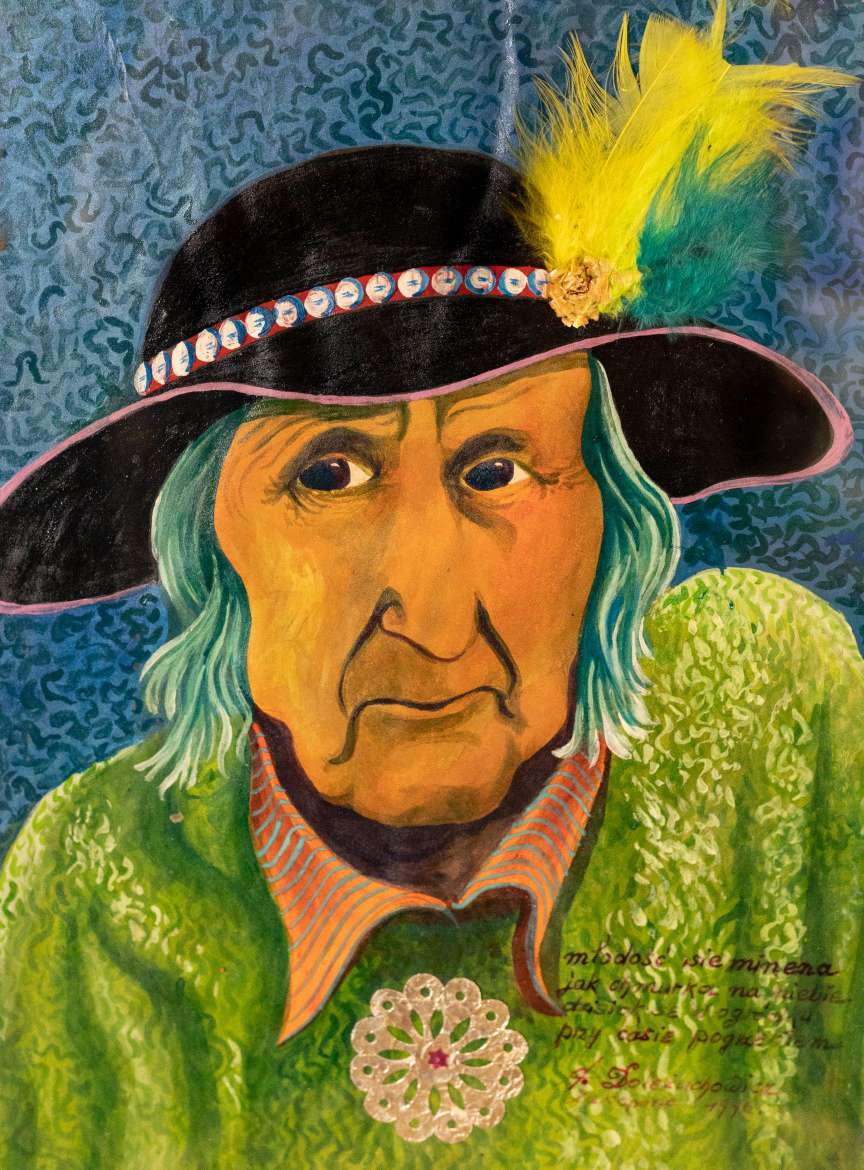 Adam Doleżuchowicz was born in Zakopane in 1923 and died in 2001. His father was a Kraków sculptor who worked in classical style. Watching his father, he learnt sculpting techniques. After graduating from primary school, Adam Doleżuchowicz enrolled in the State School of Wood Industry, where in 1944 he passed the apprentice exam. He was a multi-talented artist – painter, sculptor, woodcarver, carpenter, luthier, musician, and poet. He drew and painted from the age of 16, initially with watercolors, pastels and oils. After World War II, he worked as a sculptor, designer and product layout creator at the „Cepelia” Design Studio in Zakopane. There, he developed product designs, forty five of which were implemented. In 1974, he opened his own sculpture studio. He created carved furniture as well as carved wooden boxes, plates and other dinnerware, decorating them with Podhale ornaments. He sculpted saints, other religious scenes, and made over 3,000 sets of chess by hand. Adam Doleżuchowicz was also a valued lead musician and played with many well-known highlander music ensembles. He was a long-term artistic director of the Klimek Bachleda Highlander Song and Dance Group. He learned to read music on his own and composed many folk pieces, including: csardases, waltzes, tangos and highlander songs. The artist was also known for poetry, prose and excellent storytelling. He began to paint on glass later in his life and quickly developed his own unique style. He painted fantastical and fanciful genre scenes, sometimes sacred themes and portraits. His paintings are full of dynamics, which is quite unusual for painting on glass. Particularly noteworthy are his highlander portraits on glass – they combine expressive painting motifs with caricature features. The portraits surprise with their expressiveness and originality. Adam Doleżuchowicz’s paintings on glass have been shown at group exhibitions in Paris, Berlin, Brno, Sofia and Vilnius. His last jubilee exhibition on the occasion of the 50th anniversary of his artistic work, took place at the Tatra Museum in the villa „Koliba”, in 1998. His works can be found in museums and private collections all over Poland. Adam Doleżuchowicz was a member of the Folk Artists’ Association. For his work, he was awarded, inter alia, Gold Medal of Merit for the City of Zakopane, Bronze and Silver Cross of Merit, Knight’s Cross of the Order of Polonia Restituta. The gallery with his works is located in Zakopane at Za Strugiem 30 A.